The Adam Project Review: Time-Travel Movie Is Just The Sort Ryan Reynolds Is Known To Revel In – NDTV 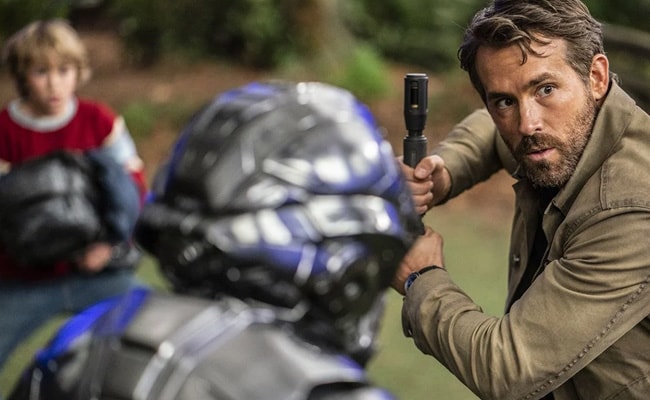 The Adam Project Review: Ryan Reynolds in a still from the film

Not exceptionally original but consistently entertaining, The Adam Project is a time-travel adventure comedy that goes easy on the science and, to its eternal advantage, clings firmly to the sentimental spindle around which the yarn is spun. It delivers a fun ride that packs quite an emotional wallop.

Directed by Shawn Levy, the Netflix film brings together a stellar cast, an unpretentious premise and plenty of sci-fi action involving cool-looking gadgets that work wonders when they are flung into direct conflict with humanity’s innate desire to protect itself from future shocks.

The film places familial relationships, parental love and the pangs of childhood at its core and gives the actors – Ryan Reynolds, Mark Ruffalo, Jennifer Garner, Catherine Keener, Zoe Saldana and child actor Walker Scobell – ample scope not to be swamped out by the eye-popping visual effects and the occasional density of the technical jargon inevitable in a sci-fi saga.

Physics is a slog, we work on problems that our children will solve, says one key character in The Adam Project. But nothing in the film feels unduly ponderous as it flows smoothly with a story that, just as much as it harps on space wormholes, time streams, jump logs and electromagnetic accelerators, explores the struggle of a mother to connect with her scarred son and the pain of a child who has lost his father in an accident.

Reynolds, who had combined with Levy to deliver last year’s surprise hit Free Guy, has produced The Adam Project in tandem with the director. The actor is cast as Adam Reed, a time-travelling Air Force pilot from the year 2050, who, while on his way to 2018, crash-lands in 2022. Risking his place in his ordained timeline, he teams up with his 12-year-old self (Walter Scobell in his first screen role) on a mission aimed at putting the “genie back in the bottle”.

In the turbulent present – which is old Adam Reed’s past – he must ensure that the future is altered in a decisive way in order to stymie the clout of a self-serving corporate entity that manipulated a discovery that facilitated time travel. “Mankind has no business tampering with the mechanics of the universe,” his father advocates.

Young Adam is a precocious, loquacious boy who is mourning his father’s death when old Adam arrives out of the blue to stir things up for him and give him the ride of his life. The slightly built boy is bullied at school and is forever nursing a bloodied nose. When the film opens, he is suspended from school for the umpteenth time for getting into a fight.

He also has trouble convincing his mother Ellie (Jennifer Garner) that he loves her as much as he loved his departed dad. “The future is coming sooner than you think,” says Adam’s mom when the boy asserts that he is only a kid and deserves to be cut some slack. Adam is still a child all right, but the future lies in wait for him and his frisky golden retriever Hawking in his dad’s garage in the shape of a surprise, game-changing visitor.

The people who control time-travel in the future are led by the greedy Maya Sorian (Catherine Keener). She unleashes her security chief Christos (Alex Mallari Jr.) and his soldiers to stop Adam Reed, who has fallen out of line and gone forth in search of his missing wife Laura (Zoe Saldana).

Maya goes head-to-head with the two Adams who, in turn are forced to zip back a few years to find their professor-father Louis Reed (Mark Ruffalo), “the godfather of time-travel”, and seek his help to prevent Maya from misusing the technology that she has appropriated.

“It sometimes pays to be nerdy,” says Louis. His wife Ellie says she likes collecting “odd ducks”, referring to her husband and her son. The pairing of the old Adam with his pre-teen avatar – a severely asthmatic boy with an inhaler who never stops speaking his mind – yields a great deal of banter and mirth, which only multiplies quickly when their deceased father comes into play.

Time is the world’s most precious resource, old Adam asserts. Young Adam, bright as he is and not averse to a battle of wits with his older self, barely grasps what is going on but is delighted to be part of the larger plan that has been set in motion.

The Adam Project is just the sort of movie that Ryan Reynolds is known to revel in. He does not have to break a sweat to get into the skin of a wise-cracking, self-knocking man who has ‘seen and lived’ tomorrow and has reason to believe that it is worth fighting for.

But once he jumps into the fray, it is Mark Ruffalo who takes to the material with unbridled glee and striking ease. He injects genuine energy into the proceedings. His story grounds the film in the ambience of a real home that misses his presence as he spends almost all his waking hours in the research laboratory on a project that he has named after his only son.

Jennifer Garner is terrific as the troubled mother who tries her best to keep her bereaved son out of harm’s way but has no clue how to work her way out of her own grief and loneliness. Catherine Keener as the ambitious entrepreneur and Zoe Saldana as Adam Reed’s wife, too, make their presence felt.

The screenplay by Jonathan Tropper, T.S. Nowlin, Jennifer Flackett and Mark Levin is peppered with wit and humour, which, coupled with the free-flowing vigour of the tale, stands The Adam Project in good stead from start to finish. Watchable all the way.